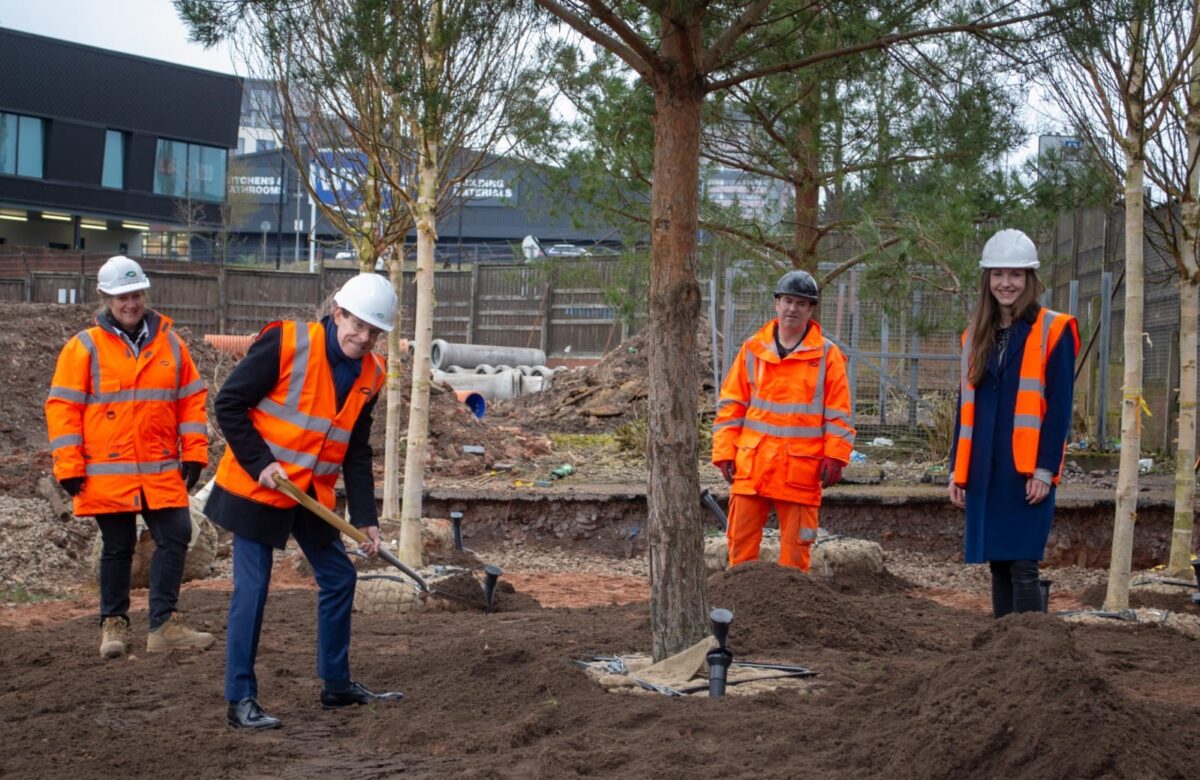 A major investment in planting to create a new urban park in Coventry is starting to put down roots.

Work has begun on planting mature trees at the new Linear Park which will form a 700m environmental corridor from Belgrade Plaza in the city centre, passing under the ring road and connecting to communities to the north.

The regeneration is supported by the West Midlands Combined Authority which has invested over £2 million in the landscaping project as part of the wider ambition to transform the area into a new, high-quality residential district.

Work is already underway on the naturalisation of Naul’s Mill pond as a new wetland habitat for wildlife and the planting of over 1,000 trees and saplings and 23,000 shrubs have now commenced.

The construction of the park is being undertaken by the UK’s leading grounds maintenance and landscape creation specialists Idverde UK, which has its headquarters in Coventry. The design of the project has been led by landscape architects, Barton Wilmore.

West Midlands Mayor Andy Street, who is standing for re-election in May, visited the developing park to plant the first tree on the 5.5-acre site.

A new water feature recreating the natural Radford Brook through the Abbotts Lane site will be the focal point of the landscaping, with a feature bridge and new tree-lined avenues on either side.

Trees will also line the entrance to the site from the underpass under the ring road which is being transformed with a new climbing wall, performance amphitheatre, planting and feature lighting. To the north, a raised central circle surrounded by new trees will provide a new seating area and play space.

The park will also provide new pedestrian and cycle routes from the north of the city as part of the planned residential districts eco-credentials.

“It was great to welcome Andy Street to the Abbotts Lane site to plant the first tree. This is a spectacular project that will make a major change in access to the city centre from Coundon and Radford.  The linear park will break the concrete collar of the ring road and link the beautiful Naul’s Mill Park directly with the city centre for everyone to enjoy,” she said.

“Planting will continue over the coming months, with the work in Naul’s Mill park expected to be completed by early summer and the whole route completed by September.

“In Coventry’s year as UK City of Culture, we think the park is a great opportunity to showcase the city’s sustainability agenda and is a fantastic legacy project that can be enjoyed by residents and visitors of all ages for generations to come.”

West Midlands Mayor Conservative candidate Andy Street said: “It was a real honour to plant the first tree in such an exciting and visionary project to create a green corridor right in the heart of Coventry.

“With City of Culture just around the corner, there is so much going on which is reinventing the city centre, from the rejuvenated railway station to the Telegraph Hotel.

“This scheme will bring nature into the urban centre of the city, passing right underneath the ring road, creating something which local people will be able to enjoy for generations to come.

“It’s also great to see that a Coventry company is undertaking the construction of the park. I’m delighted to have been able to support it.”