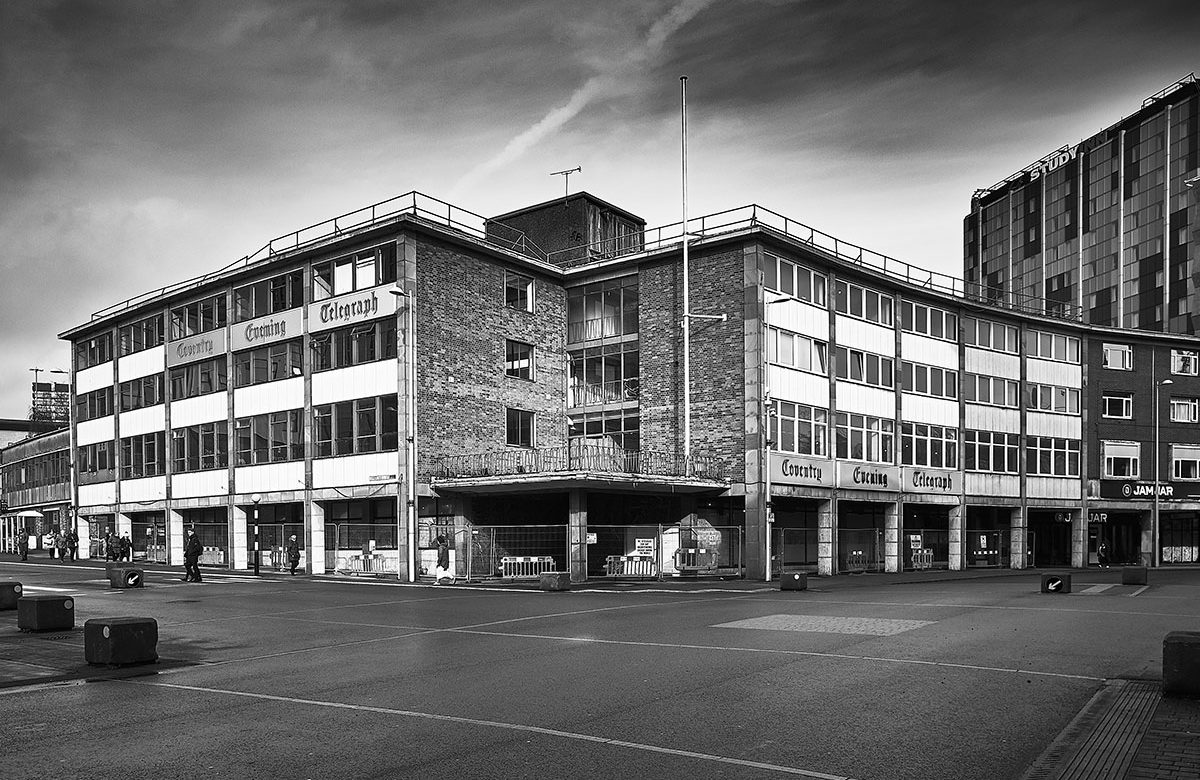 Captions: A image of the Coventry Telegraph building which is to be transformed into a hotel and the terrace, exterior and a bedroom all at Hotel Gotham, Manchester.

The UK’s largest independent hotel group has reached an agreement to operate a 1950s-style boutique hotel at the former Coventry Telegraph offices.

Bespoke Hotels was founded in 2000 and manages over 9,500 hotel rooms in 21 countries from Australia to America and has 8,000 employees as well as £815 million of assets.

The group manages 96 hotels in the UK including the chic Bermondsey Square Hotel in the heart of London’s creative district, art deco themed Hotel Gotham in Manchester, the Billesley Manor Hotel in Stratford and the Carnoustie Golf Hotel where guests can play the 2018 Open Championship Golf Course.

Construction is planned to start at the end of the year on creating 100 bedrooms, a ground floor restaurant and bar, meeting rooms, penthouse suites and a rooftop bar after planning approval was granted by Coventry City Council on July 16. Final approval from the Council is awaited for long lease extensions necessary to deliver the project.
The original features of the building which include the panelled Board Room and Lord Iliffe’s apartment will be retained as unique features of the building’s former life.

Around 130 jobs will be created when the hotel opens which is scheduled to be ahead of Coventry being UK City of Culture in 2021.

Chairman of Bespoke Hotels, Robin Sheppard, who founded the business with Haydn Fentum, said: “This is an iconic building charged with much recent history of the City of Coventry with a really strong tone of voice from which we hope to deliver a rich narrative with nods to the 1950s heyday of the building and a cool contemporary twist.
This will be a destination hotel with tons of character and a cheeky smile.”

Ian Harrabin, Managing Director of CDP, said the securing of Bespoke Hotels underlined the national appeal of the project.

“The project is unique and we needed an operator that embraced our vision for something that will be truly Coventry,” he said. We took advice from national hotel experts and Bespoke was our first choice of partner. We have been working with them for the past six months on the detail of the project and are happy that they share our enthusiasm for Coventry and recognise the opportunity of this unique building.

“We want to create a style of hotel that is not offered anywhere else in the area – a style that is truly bespoke. Their experienced team bring out the heart and soul of hotels with their professionalism, experience, flair and individuality.”

A perfect example of this is Hotel Gotham which is a five-star hotel that was named World’s Best New Hotel and Coolest Boutique Hotel following its opening in 2015 because of its attention to detail ranging from its art deco design to providing a luxury chauffeur service.

Partnered with CDP’s track record of delivering creative developments that break the conventional mould such as FarGo Village and Electric Wharf, the new Telegraph Hotel will also be unlike any other.

Harrabin continued: “We want to give the city an hotel that Coventry can be proud of and provide a focus for the City of Culture status that has been bestowed for 2021. We have been delighted to have received such strong support from all local stakeholders, not least within the council and are determined to create something special with our chosen award-winning hotel operators.”

The project is supported by West Midlands Combined Authority through the Collective Investment Fund managed by Finance Birmingham.

Formed in 2000, Bespoke Hotels has grown to represent over 200 properties worldwide, and now stands as the UK’s Largest Independent Hotel Group. Ranging from specialist golfing hotels, to award-winning spa resorts and chic city centre properties, the group prides itself on a diverse roster and a unique, individualised management style. Its Chairman and Co-Founder, Robin Sheppard, was also recently appointed Chairman of the Institute of Hospitality.