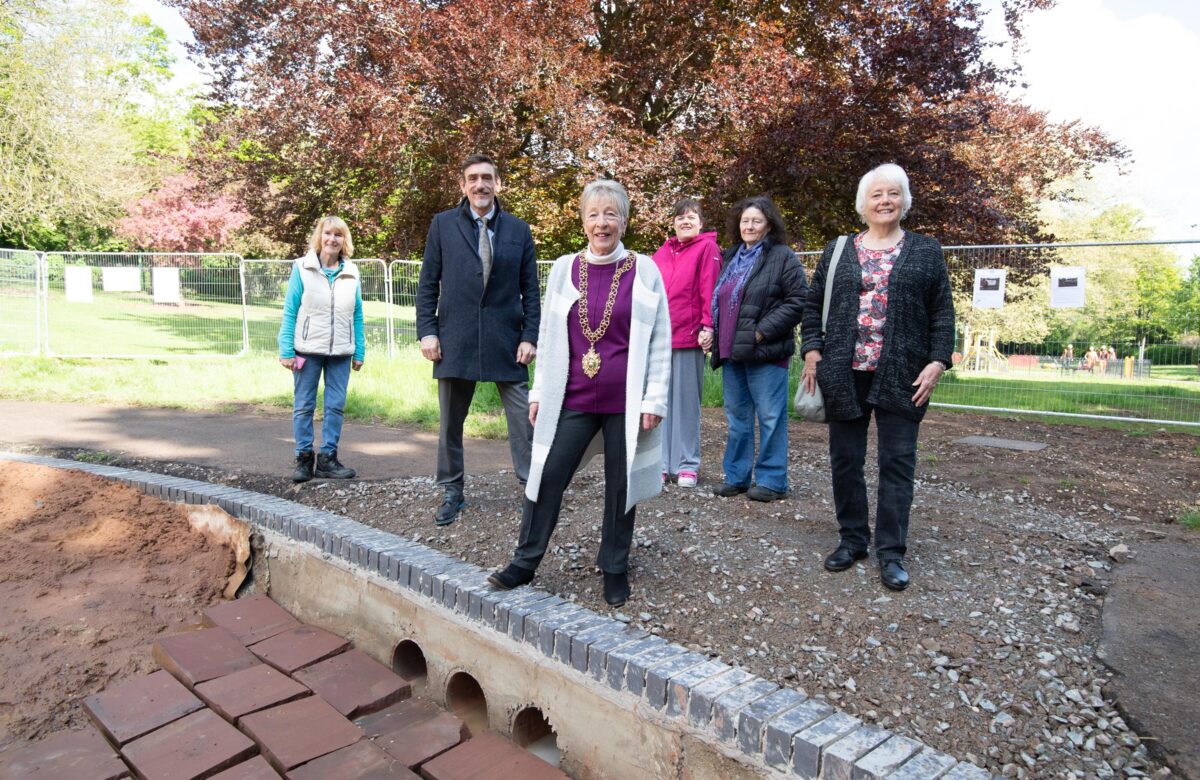 A community group has described the £300,000 improvements to a Coventry city centre park as a “dream come true” as the work looks set to be completed this autumn.

The Friends of Naul’s Mill Park and Complex Development Projects (CDP) met Lord Mayor of Coventry Cllr Ann Lucas as she performed a ceremonial turning on of the tap to refill the large pond after the first stage of regeneration works have been completed.

Originally a 12th-century mill pond, the large concrete-lined Edwardian model boating lake has been drained for much of the time in recent years suffering from leakages and problems with algae.

But now as part of wider plans to create a new linear park from Belgrade Plaza to Naul’s Mill Park, local landscape contractors Idverde, employed by CDP, have been working to naturalise the pond to create a new wildlife haven in the heart of the city.

Large pipes have been laid from the Radford Brook culvert to Naul’s Mill pond to improve water flow, the pond has been regraded and lined to improve water quality and to prevent leaks, and aquatic plants will be added shortly to develop a natural habitat.

Some 400m of underground pipework has been installed by a moling machine, bringing the natural brook under two roads to re-emerge in the former depot site in Abbotts Lane where the Radford Brook is being recreated at surface level surrounded by newly planted trees and shrubs as a continuation of the park. The brook will be the central feature for a new high-quality residential district.

Mary O’Hagan, of the Friends of Naul’s Mill Park, said the park is an important green space in the heart of Coventry.

“It is a dream come true for us to see this work take place,” she said. “The main reason we formed the park community group was that we were so sad at its deterioration.

“We have been lobbying for many years for the lake to be restored. It is a wonderful green space that is used by the community whether it is children playing, dog walkers, or people enjoying a picnic.

“Linking this park to the city centre is really important because we will no longer feel cut-off by the ring road.  It’s only 400m from the Belgrade Theatre as the crow flies, but because of the ring road, it has always been hard to get to and it is surprising how many people don’t know that the park and it is fantastic to see this work going on to make it a place for everyone to enjoy.”

Beth Hensman, of Friends of Naul’s Mill Park, added: “This is such an important park since many people living near here don’t have a garden.”

Cllr Lucas, who came to the park as one of her last official engagements during her year as Lord Mayor, said: “I was really impressed by the overall concept which will be transformational – connecting a part of the city that has been cut off for far too long. The naturalisation of the lake and re-creation of Radford Brook will turn back the clock to a time when nature came right into the city centre.

“We are all very grateful for the efforts of the Friends of Naul’s Mill Park over many years and it is so nice to see their vision for the lake being finally achieved.”

Katie Burn, senior development executive at CDP, said: “The Friends of Naul’s Mill Park have done a fantastic job in helping to maintain and improve the park but it has been in need of major capital investment for a long time. By working together, we have managed to include the naturalisation of the lake within the overall Linear Park project by securing funding from the WMCA.

“We have worked closely with Coventry City Council on the project which will make a big difference to the health and wellbeing of people living nearby and further afield as the wider plans will bring it into the heart of the city.

“The work is progressing well and is due to open in September in time to showcase the city’s ever-growing green credentials during Coventry’s year as UK City of Culture.”